Where did we begin?

On Thursday, September 25, 2014, the Creative Inquiry Advisory Committee hosted a professional development session to get the word out to GTC instructors and staff about our new, college-wide, undergraduate research and problem-based learning program. The Creative Inquiry program at GTC is just getting off the ground and we need instructors from all divisions to participate by serving as mentors on student projects or by inviting students to help out on their research. 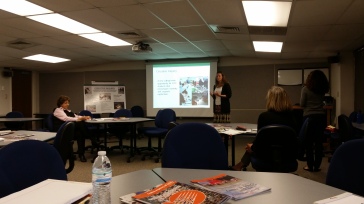 Dr. Lee Edwards (Biological Sciences) kicked off the session by describing GTC’s program, from its beginnings back in the Summer of 2013 to its implementation in Fall of 2014. She detailed the steps faculty members and students need to take to get involved. 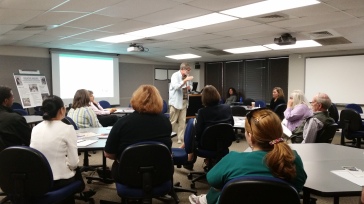 Dr. Kevin Morris (English) gave everyone examples of partnerships between students, faculty members, and staff members that are possible in the Creative Inquiry program.

Michelle Rubino (Librarian) showed off the work the committee has done on our Research Guide.  Displaying the Guide on the projection screen, she clicked through its tabs identifying locations for general information, the faculty topic submission form, the student research contract form, and a list of faculty and staff who have already submitted their areas of expertise so students can find a suitable mentor and begin making plans for the Spring 2015 semester.

Dr. Barbara Speziale, Creative Inquiry director at Clemson University, was a guest speaker, and showed off the projects their students are working on, demonstrating the potential of this kind of program. She spoke of teams of students going to Haiti to design and build a system to bring fresh water to remote areas of the island, a team of students who put together a photographic atlas of ruminant animals by dissecting an actual animal and taking pictures of the organ systems, bones, and muscles (yikes!), and psychology students researching whether peddling at a FitDesk while studying actually resulted in increased test scores! Attending faculty saw how nearly any idea can be turned into a Creative Inquiry project and were inspired by the potential of projects to work on with our highly motivated GTC students!

Before we even launched the program, four members of the GTC CI Advisory Committee attended a national conference geared towards helping community colleges develop a research program. What did we learn?

In July, I joined professors Lee Edwards and April Dove and librarian Michelle Rubino for a community college research conference in Lincoln, Nebraska.

Like Greenville Technical College, most two-year colleges focus on career education and transfer opportunities, so the terms “community college” and “research” are not often associated. While we teach critical thinking skills and research strategies, deep scholarly research has typically been linked with graduate work.

In 2013, our faculty questioned that mindset. Success stories from Clemson University’s Creative Inquiry program provided evidence that undergraduate students could perform meaningful research. While there were no nearby examples of research programs in two-year colleges, our faculty were confident that a program matching motivated Greenville Tech students with faculty researchers and academic support services could also be successful.

Greenville Tech formed a Creative Inquiry Committee. The members developed a plan to offer research courses spanning several disciplines. With the launch of those courses a month away, the July conference was a timely opportunity for us to close the loop. In Nebraska, we met face-to-face with faculty, staff, and administrators from other community colleges who had also embraced the idea that two-year college research programs.

Like Greenville Tech, some colleges were starting programs, but several colleges had grown research programs over many years. Drawing on their experiences and successes, we returned to Greenville with new ideas for our long-range Creative Inquiry plans and optimism for the earliest research projects that would begin in fall term.

When our team was selected to go to the workshop in Nebraska, I had no idea about the number of schools participating or at what point their undergraduate research programs would be. Since the GTC Creative Inquiry program had not even offered the first research course, I thought we would be well behind other community colleges. I was quite surprised to discover that there was only one other southeastern community college in attendance at our workshop and that very few schools had developed a college-wide undergraduate program. Most schools had only a few instructors involved and the research was being conducted as part of a pre-existing course. Greenville Tech was ahead in implementation of those schools interested in offering undergraduate research college-wide. I was very proud of the work our GTC Creative Inquiry committee had accomplished! 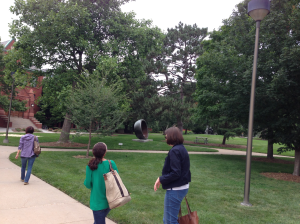 I was fortunate to be able to attend the ‘Tapping the Potential of all Students: Developing and Enhancing Undergraduate Research in Community College Settings’ conference in Lincoln, Nebraska in July 2014 with Lee, Cindy and Michelle.  The conference served as a great stepping stone to assist in the development of our own undergraduate research program at GTC, called Creative Inquiry.   The most important thing I learned at the conference was that many community colleges around the country are actively working to establish research oriented programs of study.  We were able to meet and discuss the development process of Creative Inquiry with other colleges who were just beginning to design plans for their own programs, with colleges mid-way through the process (much like us), and even with colleges that have long established programs that are successful.  We were able to establish networking contacts with faculty and staff from these colleges that will certainly be helpful to us as we continue establishing the framework for the Creative Inquiry program at GTC.  Ultimately, I learned that we must define for ourselves as a college community what research will mean to the Creative Inquiry program – and that it is important to include as many types of research projects from across the college’s many disciplines in the program.  Doing so will maximize student access and involvement, engagement, and most importantly their learning experiences in participating in academic research.

For the past year I have served on the Committee for the Development of Creative Inquiry Projects at GTC, and in an effort to fully establish a culture of research at the College, committee-peers and I attended the “Developing Undergraduate Research at Community Colleges: Tapping the Potential of all Students”, workshop at Southeast Community College, in Lincoln, NE, in July. Upon landing, and attending opening workshop sessions, it was apparent that I was immersed in a fully-Footloose weekend: I was the sole librarian in a group of faculty and administrators, set against a backdrop the agricultural Midwest. As the weekend progressed, however, discussions moved from “establishing a research culture on our campus and gaining faculty investment”, to “discovering the research questions our students are asking, and discerning how to help them arrive at THE question”. It was encouraging to see all workshop participants articulate and engage with the research process in an effort to better support their students’ success with creative inquiry. It further boosted my confidence in the headway made by the GTC Creative Inquiry Committee, as this is a dialogue that has woven its way through nearly all of our meetings. No, our weekend did not conclude with Kevin Bacon shouting “let’s dance!” under a shower of confetti, but with confidence gained, and network of supportive peers established, the weekend felt like a complete success (cue Tiffany, Journey, Culture Club and Tone Loc tunes on the airport’s radio).

My Tweets
Follow Creative Inquiry at GTC on WordPress.com